Hollywood is about to get BIGGER!

Home/PRESS/Hollywood is about to get BIGGER!
Previous Next

Hollywood is about to get BIGGER! 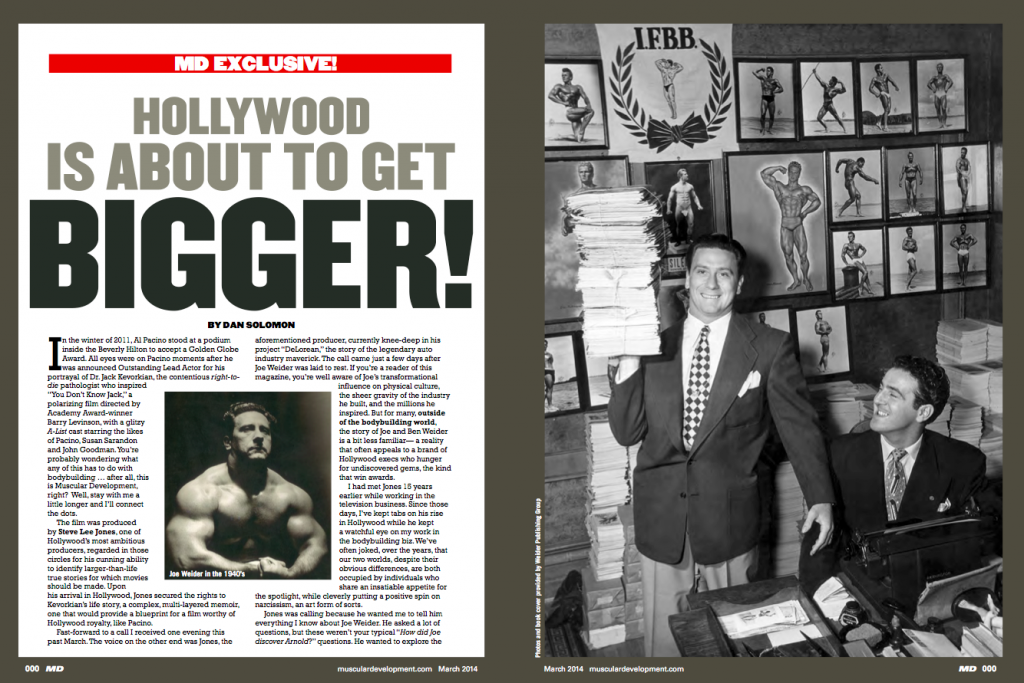 In the winter of 2011, Al Pacino stood at a podium inside the Beverly Hilton to accept a Golden Globe Award. All eyes were on Pacino moments after he was announced Outstanding Lead Actor for his portrayal of Dr. Jack Kevorkian, the contentious right-to- die pathologist who inspired “You Don’t Know Jack,” a polarizing film directed by Academy Award-winner Barry Levinson, with a glitzy A-List cast starring the likes of Pacino, Susan Sarandon and John Goodman. You’re probably wondering what any of this has to do with bodybuilding … after all, this is Muscular Development, right? Well, stay with me a little longer and I’ll connect the dots.

The film was produced by Steve Lee Jones, one of Hollywood’s most ambitious producers, regarded in those circles for his cunning ability to identify larger-than-life true stories for which movies should be made. Upon his arrival in Hollywood, Jones secured the rights to Kevorkian’s life story, a complex, multi-layered memoir, one that would provide a blueprint for a film worthy of Hollywood royalty, like Pacino.

Fast-forward to a call I received one evening this past March. The voice on the other end was Jones, the aforementioned producer, currently knee-deep in his project “DeLorean,” the story of the legendary auto industry maverick. The call came just a few days after Joe Weider was laid to rest. If you’re a reader of this magazine, you’re well aware of Joe’s transformational influence on physical culture, the sheer gravity of the industry he built, and the millions he inspired. But for many, outside of the bodybuilding world, the story of Joe and Ben Weider is a bit less familiar— a reality that often appeals to a brand of Hollywood execs who hunger for undiscovered gems, the kind that win awards.

I had met Jones 15 years earlier while working in the television business. Since those days, I’ve kept tabs on his rise in Hollywood while he kept a watchful eye on my work in the bodybuilding biz. We’ve often joked, over the years, that our two worlds, despite their obvious differences, are both occupied by individuals who share an insatiable appetite for the spotlight, while cleverly putting a positive spin on narcissism, an art form of sorts.

Jones was calling because he wanted me to tell him everything I know about Joe Weider. He asked a lot of questions, but these weren’t your typical “How did Joe discover Arnold?” questions. He wanted to explore the earliest stages of Joe’s life, his childhood, his struggles with anti-Semitism, and the risks that were taken by a pair of young men who sought to change the way the world viewed muscle. It was obvious that Jones had done his homework and, true to his reputation, he had already begun peeling away the layers of a story that would begin in poverty, in the depths of the Great Depression.

It was only a few minutes into the conversation when I reminded myself that I was speaking with someone who had the vision, and the power, to bring this story to life, to tell it in a way that no bodybuilding story had ever been told.

There have been smaller-scale efforts, most recently an ambitious documentary called “Generation Iron,” but never before has there been a major theatrical feature film that places bodybuilding front and center for the world to see. The story of Joe and Ben Weider had landed on Hollywood’s radar, and after speaking with the man who helped garner a Golden Globe for Pacino, I was prepared to do everything in my power to make sure this project advanced beyond our initial conversation.

Eric Weider’s Keys to the Kingdom

In the movie business, a film based on a real-life individual is termed a biopic, and when telling the story of someone no longer living, the crucial first step is to secure the “life rights” from the estate of the deceased. This critical step provides unfettered access to the most personal and private details, the kind of minutiae that can provide an audience with a view of the subject unlike any they’ve seen before. In this case, the subjects are Joe and Ben Weider, and the man who holds the keys to the kingdom is Eric Weider— Ben’s son, Joe’s nephew and the head of the billion-dollar family empire. My first task was to coordinate a meeting between Eric and our producer, an assignment that would require a delicate pitch to a man who cares deeply about the legacy of his late father and uncle. I called Eric and informed him that Hollywood had come calling. I spoke glowingly of the opportunity and the authenticity of the producer. Once Eric realized that I wouldn’t let him off the phone until he gave me the answer I was looking for, he cautiously agreed to a meeting.

“When I first heard from Steve Lee Jones I was a little skeptical,” explains Eric Weider. “I quickly learned, though, that Steve was the real deal, not just a dreamer. He is someone with a big vision and the know-how along with the track record to get this done. The more time I spend with him, the more impressed I am.”

After a series of meetings, Jones’ Hollywood-based company, Bee Holder Productions, announced it had secured exclusive rights to the Joe and Ben Weider life story, and book rights to Brothers of Iron from the parent company, Weider Health and Fitness. 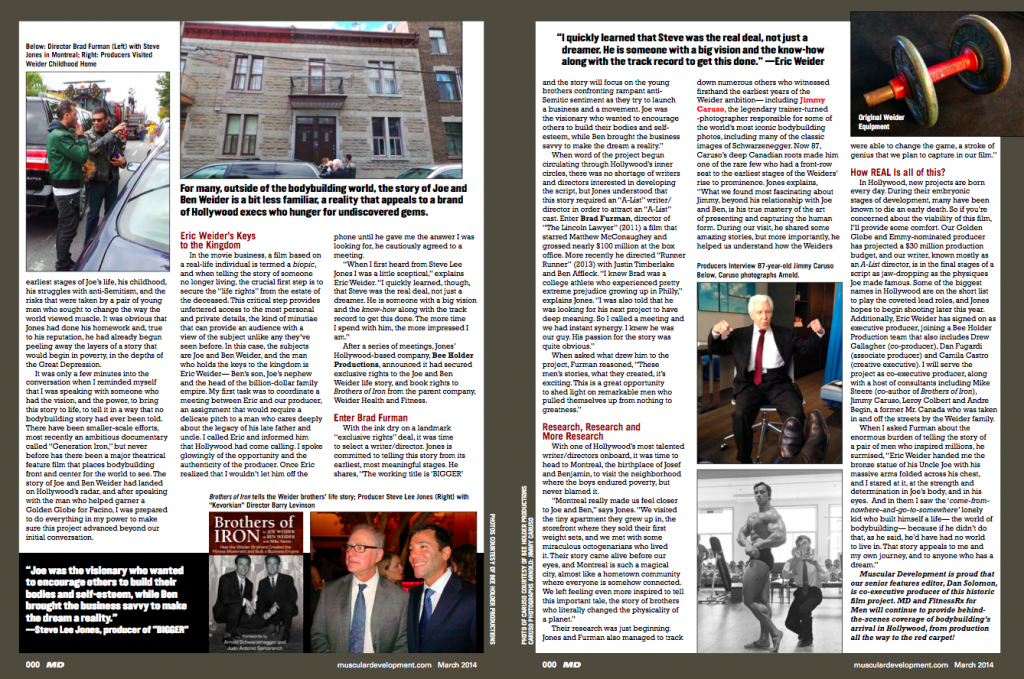 With the ink dry on a landmark “exclusive rights” deal, it was time to select a writer/director. Jones is committed to telling this story from its earliest, most meaningful stages. He shares, “The working title is ‘BIGGER’ and the story will focus on the young brothers confronting rampant anti-Semitic sentiment as they try to launch a business and a movement. Joe was the visionary who wanted to encourage others to build their bodies and self-esteem, while Ben brought the business savvy to make the dream a reality.”

When word of the project began circulating through Hollywood’s inner circles, there was no shortage of writers and directors interested in developing the script, but Jones understood that this story required an “A-List” writer/director in order to attract an “A-List” cast. Enter Brad Furman, director of “The Lincoln Lawyer” (2011) a film that starred Matthew McConaughey and grossed nearly $100 million at the box office. More recently he directed “Runner Runner” (2013) with Justin Timberlake and Ben Affleck. “I knew Brad was a college athlete who experienced pretty extreme prejudice growing up in Philly,” explains Jones. “I was also told that he was looking for his next project to have deep meaning. So I called a meeting and we had instant synergy. I knew he was our guy. His passion for the story was quite obvious.”

When asked what drew him to the project, Furman reasoned, “These men’s stories, what they created, it’s exciting. This is a great opportunity to shed light on remarkable men who pulled themselves up from nothing to greatness.”

How REAL is all of this?

In Hollywood, new projects are born every day. During their embryonic stages of development, many have been known to die an early death. So if you’re concerned about the viability of this film, I’ll provide some comfort. Our Golden Globe and Emmy-nominated producer has projected a $30 million production budget, and our writer, known mostly as an A-List director, is in the final stages of a script as jaw-dropping as the physiques Joe made famous. Some of the biggest names in Hollywood are on the short list to play the coveted lead roles, and Jones hopes to begin shooting later this year. Additionally, Eric Weider has signed on as executive producer, joining a Bee Holder Production team that also includes Drew Gallagher (co-producer), Dan Fugardi (associate producer) and Camila Castro (creative executive). I will serve the project as co-executive producer, along with a host of consultants including Mike Steere (co-author of Brothers of Iron), Jimmy Caruso, Leroy Colbert and Andre Begin, a former Mr. Canada who was taken in and off the streets by the Weider family.

When I asked Furman about the enormous burden of telling the story of a pair of men who inspired millions, he surmised, “Eric Weider handed me the bronze statue of his Uncle Joe with his massive arms folded across his chest, and I stared at it, at the strength and determination in Joe’s body, and in his eyes. And in them I saw the ‘come-from-nowhere-and-go-to-somewhere’ lonely kid who built himself a life— the world of bodybuilding— because if he didn’t do that, as he said, he’d have had no world to live in. That story appeals to me and my own journey, and to anyone who has a dream.”

Muscular Development is proud that our senior features editor, Dan Solomon, is co-executive producer of this historic film project. MD and FitnessRx for Men will continue to provide behind-the-scenes coverage of bodybuilding’s arrival in Hollywood, from production all the way to the red carpet! 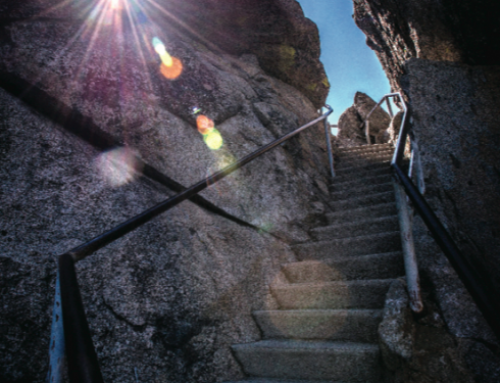 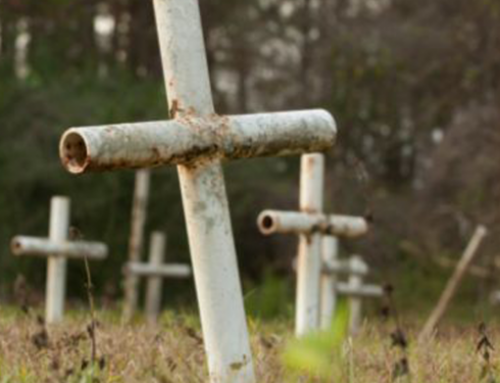 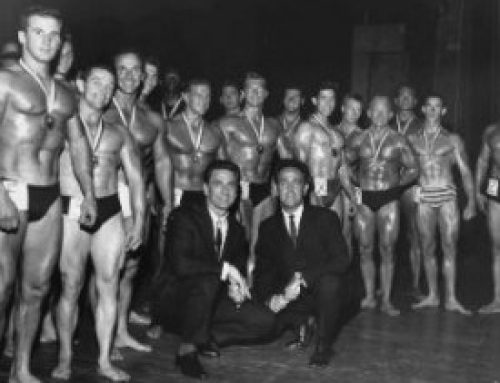